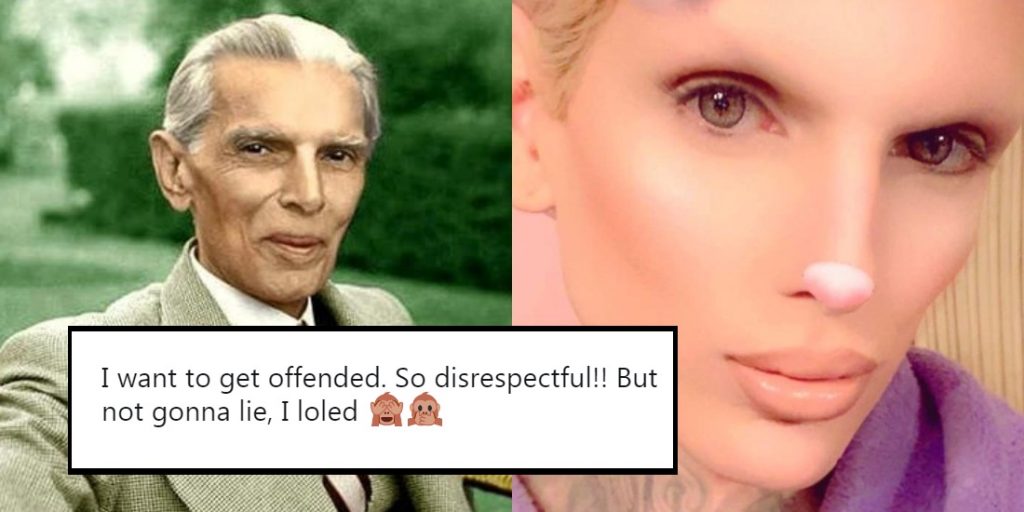 Pakistan Just Discovered That Jeffree Star Is Quaid-E-Azam’s Look-A-Like And It’s Sad And Funny At The Same Time!

Pakistanis can be very entertaining and they never cease to amaze people with their hilariousness and crazy talent they’ve been gifted with. No kidding! And let’s be honest here about the fact that the internet can be crazy place to be at! I mean, ever thought about the wickedness you come across on a daily basis? LOL. Yeah, exactly.

Anyway, we recently came across a tweet where a Pakistani guy found an American look-a-like of our founder, Quaid-e-Azam Muhammad Ali Jinnah! And trust me here, the resemblance is uncanny! But wait, WHO was that American? It was none other than Jeffree Star – An American male beauty vlogger, makeup artist, entrepreneur, and musician, who also happens to be the founder and owner of Jeffree Star Cosmetics.

Here’s the picture Jeffree had posted that caught our Pakistani bhai’s attention!

Hiiiiiii Monday, how are ya?? pic.twitter.com/KrD7vZAmJQ

However, this sneaky guy tried to be really funny when he found Jeffree’s picture on Twitter!

Quaid is that you? https://t.co/RUfZkbxY7S

Jeffree after finding out…. LOL

Some people found it to be reallyyyy hilarious….

I want to get offended. So disrespectful!! But not gonna lie, I loled ??

What do you think?

the resemblance is uncanny ??

People were having a good time!

and on the other hand, some found it to be insulting…

I will take that as an insult of my quaid

No son, this is your father!!

He is jefree star. -_- m that waznt funny when u compare him with Quaid

Respect plzzzz its not funny at all

This is indeed funny and sad at the same time. But hey, he actually resembles him. What’s the matter in it? Don’t you agree with this? If you do, let us know in the comments below!

Nestlé Pakistan Puts Rural Women On The Path To Prosperity

Razia, a mother of two from Sheikhupura, would rely on her husband to sustain their family until he began finding ...