Daren Sammy Humiliated his Fan Who Tried to Insult Pakistan and He REALLY Deserves An Honorary Nationality!

Pakistan Super League (PSL) newest season is around the corner and teams are gearing up already. Just yesterday, Karachi Kings released their (not so impressive) kit shoot starring the captain Imad Wasim, bowler Muhammad Amir and other key players.

Karachi Kings isn’t the only team with the kit launch for this season; on Monday, earlier this week, Peshawar Zalmi also launched their kit in a grand ceremony where the Zalmi captain and West Indies star player Daren Sammy was present as well.

Pakistanis Welcomed Sammy With All the Love and Support

And Sammy was grateful. In a tweet, Sammy showed his love for Pakistanis given the way they welcomed him.

“United we stand divided we fall” Love makes the world go round. Nothing but love for the people of Pakistan

"United we stand divided we fall"
Love makes the world go round.
Nothing but love for the people of Pakistan #ClarasBoy #AspireToInspire https://t.co/2Yyb6Uxj5v pic.twitter.com/fnQvJBBdh0

Sammy Also Thanked Javed Afridi, the Owner of PZ, for Introducing him to Pakistanis Through PSL

Sammy has been the part of PSL since its first edition and was one of the few international players who was willing to come to Pakistan for the final that took place in Lahore. With his positive attitude and love for Pakistan, he feels grateful to be a part of PSL.

Thank you for introducing me to the love I receive in Pakistan. Nothing but love for u brother and your people,l. United we stand divided we fall. Let love make the world go round @JAfridi10

Thank you for introducing me to the love I receive in Pakistan. Nothing but love for u brother and your people,l. United we stand divided we fall. Let love make the world go round @JAfridi10 pic.twitter.com/DdBXd8FjwC

While Sammy indeed feels safe and loved in Pakistan, a fan tried to create negativity by calling Pakistanis terrorists. This fan commented “they are terrorists” on Sammy’s post where the cricketer showed his love for Pakistan.

But Sammy Couldn’t Take This Sort of Comments On Pakistan

And instantly showed this troll his rightful place. Sammy asked the troll to “get off his page” after seeing his comment. 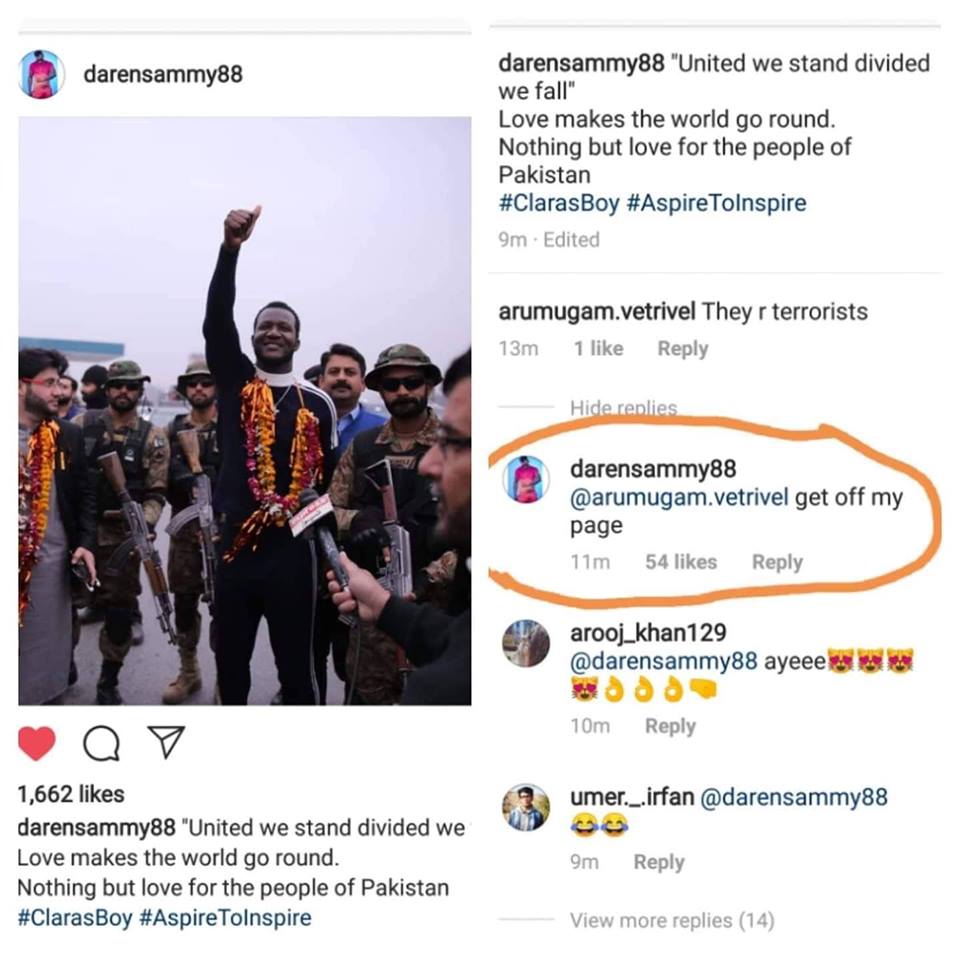 Massive respect for Sammy for taking the love and admiration for PSL to a higher level and making us all feel pretty attached to having him in this sporting event. But the bigger question is: will Sammy lead PZ to winning this year’s PSL yet again or nah?