Iqra Aziz Breaks Silence Over 'That' Scene From Ranjha Ranjha Kardi Which Proved That Bhola Was 'Not-So-Bhola'! 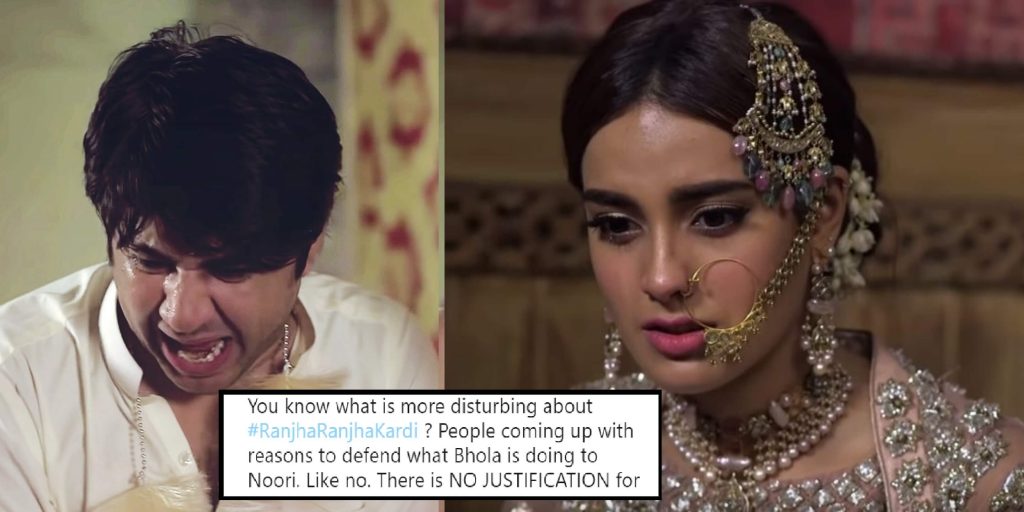 Iqra Aziz Breaks Silence Over ‘That’ Scene From Ranjha Ranjha Kardi Which Proved That Bhola Was ‘Not-So-Bhola’!

Today we are part of a society where subjects of grave importance such as Forced Intimacy that needs much of discussion, are suppressed under a very lame terminology of “Gherat”.

In this regard, a very popular TV series, Ranjha Ranjha Kardi currently running on HUM TV is breaking the stereotypes by highlighting such taboos of our society…

It’s not easy to speak about Taboos in Pakistan…

But it is not easy to penetrate the negative mentalities of people, especially in a society where such traditions prevail for centuries. On top of that, it is the woman whose morality is questioned if she opts to speak-up against these practices…

Just as we saw people normalizing what Bhola did to Noori, “no girl deserves to live in such a relationship just because her husband is ill,” a user named Aliya tweeted.

Our society must learn to safeguard their daughters from such mentalities…

The lead character of the show, Iqra Aziz decided to take it to the audience and she responded in a truly emphatic manner. She shared the scene in question and wrote, “One of the most pressing issues today that we don’t talk about is that we think of marriage as a binding contract to anything and everything. But marriage is based on trust and love and consent.”

“Consent to live, to breathe, to be able to say no. I hope Noori and Bhola live happily ever after and let’s see how Noori tackles all the problems and Sahir in this situation.”

How the Pakistani Law directs us on this issue

According to Pakistan’s Penal Code 375, rape is defined as, “A man is said to commit **p* who has s***l interc*ur*e with a woman under circumstances falling under any of the five following descriptions:

In the light of Islam

Dignified Islamic Jurists have laid great emphasis on this issue and said that it is prohibited for Muslim man to coerce his wife into an intimate relation, highlighting the importance of consent on several occasions.

Al-Shafi’i, may Allah have mercy on him, said:

“Likewise, if a wife is by herself with him or a servant girl of his with whom he has intimate relations, he is commanded to fear Allah Almighty and to not strike her during interco*rse… As for intimacy, its purpose is pleasure and no one may be forced into it.”

Aisha reported: I said, “O Messenger of Allah, should women be asked for their consent before marriage?” The Prophet, peace, and blessings be upon him, said:

I said, “Indeed, sometimes a virgin is too shy to speak when asked.” The Prophet said:

“Her silence is her consent.”

Hazrat Abu Bakr reported: The Prophet, peace, and blessings be upon him, said:

“He will not enter Paradise who is an evil custodian.”

“Do not compel your servant girls to prostit***on, if they desire chastity, seeking the interests of worldly life. If someone should compel them, then Allah is (to them), after their compulsion, forgiving and merciful.”

In light of the above references, it becomes quite clear that it is the man who is held responsible for transgressing his rights… And without the appropriate role of a mother, bringing-up such men in our society would be next to impossible…