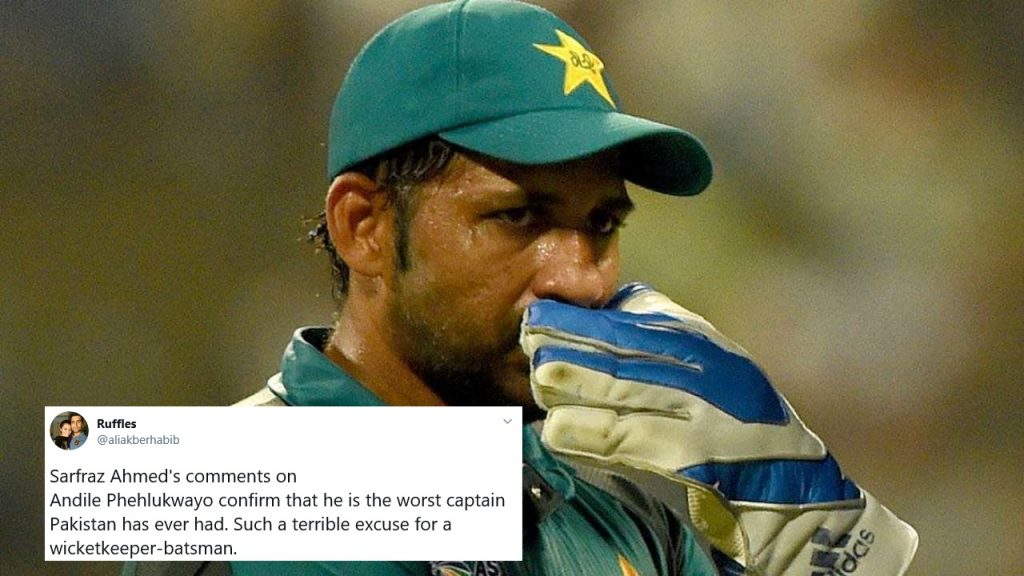 Sarfaraz Ahmed Calling a South African “Kaala” Can Get him In BIG Trouble and Pakistanis Are Pretty Furious!

Pakistan cricket national team’s captain Sarfaraz Ahmed is facing loads of criticism nowadays due to his poor performance on pitch. The captain who won us the ICC Champion’s Trophy has definitely lost track of his captaincy seeing his recent results and performance. Pakistanis believe that the captain lacks the personality and performance on-pitch to lead the team.

Based on the results, the fluctuation in performances of the team which entirely depends on the handful lone wolves and not the entire team, Pakistanis believe he is not the right captain for our team. While many wish that he is let-go, maybe their wishes will finally come true now but not because of his performance, but because of his recent unprofessional behavior.

During the Match Against South African, Sarfaraz Uttered Some EXTREMELY Racist Words to Andile Phehlukwayo

The wicket-keeper said the following words: “Abbay kaalay! Teri Ammi kahan bethi hoyi hain aaj? Kya parhwa kay aaya hai aaj?” The English commentator even asked Ramiz Raja to translate this statement, and Raja covered it by saying it is a long sentence which he could not translate at the moment. However, Sarfaraz was loud enough to be heard by the cameras.

If you translate this sentence in English, it means the following: “Hey black guy. Where’s your mother sitting today? What have you asked her to pray for you?”

As the captain and the representative of the national team, it is extremely disgusting to hear such statements. Here’s the footage where one can clearly hear Sarfaraz:

Sarfraz Ahmed's comments on
Andile Phehlukwayo confirm that he is the worst captain Pakistan has ever had. Such a terrible excuse for a wicketkeeper-batsman.#PAKvSA #SAvPAK

Not Just In South Africa But ANYWHERE

What’s wrong is wrong, man! A captain should know better.

Sarfraz Ahmed should have known better… Not in South Africa! You do not use racial slurs in South Africa. He is in big big trouble… I hope he gets banned for a year!

Racist remarks should not go unpunished. @TheRealPCB should take a strict against Sarfaraz Ahmed. Ban him for a match or two and set an example for rest of the team mates.

Just a few days ago, the BCCI took strict actions against Hardik Pandaya and KL Rahul for their sexist remarks on Koffee with Karan. PCB needs to set a similar example for their players to learn. Racism is unacceptable and a captain should have known better.

Let’s see how Sarfaraz deals with this. Based on the traction on social media, pretty soon ICC will take notice of this as well.