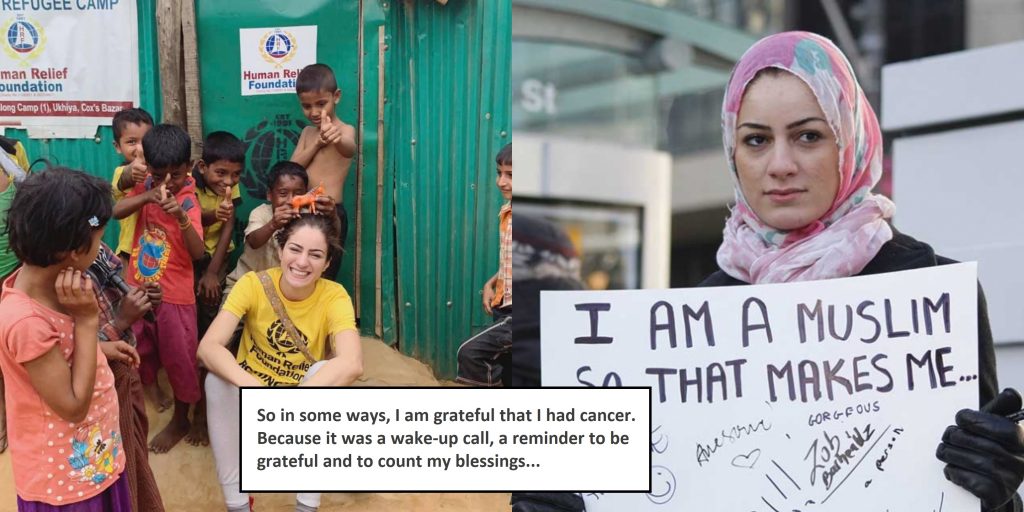 The Canadian Girl Who Was Cat-Called In Rawalpindi Is A Cancer Survivor And Her Story Is Extremely Inspiring!

On April 15, the news went viral regarding prominent human rights activist, Assma Galuta (alias Asoomii Jay) when she was catcalled in Rawalpindi by two depraved young men. Two days earlier the story curtailed when the victim generously decided to pardon both the suspects who were later released from police custody.

Although Asoomii lauded the prompt action by the police department in apprehending the offenders and the measures taken by the Prime Minister Imran Khan to facilitate Pakistani women, she seemed a little less impressed with how the Pakistani media used selective terms to instigate sensation while reporting the story… In fact, Asoomii is more popular around the globe as a human rights activist rather than a ‘Canadian Model’ upon which, our media preferred to focus more; maybe because this term had better potential in harnessing more clicks…

On social media handlers, Assma is very vocal on issues relating to social injustice, especially war crimes by Israel in Palestine, Indian Atrocities in Kashmir and Western meddling in the middle east behind the smokescreen of their so-called ‘war on terror’. She is also a distinguished member of the Global Peace Summit program, which is a Pakistani initiative to attain international peace through dialogue and diplomacy.

Asoomii has recently married a Pakistani man and is currently spending time with her inlaws in Lahore.

Asoomii has responded sternly to all those who accused her of using ‘white privilege’ or by saying that she intentionally wanted to make the story viral in order to garner public attention.

“To those who continue to abuse me claiming I’m using my “white privilege” is absurd. I’ve been pushing for Pakistanis since the day I arrived in Pakistan, to drop the colonial mentality & treat each other better.
So abusing me for wanting to work with you and give YOU a voice, abusing me without doing any work yourself for the women in Pakistan, shows you’re simply a joke.
Support your fellow sisters in Pakistan no matter what color or race they are.
This isn’t a race issue, this is a “you’re just an asshole” issue and I won’t @ you to give you the fame you crave.

And by the way, I’m not even white.
I’m an African Berber.
My people were colonized by the white Europeans too.
Before you accuse,
At least get your facts right.”

Aoomii is known internationally for raising awareness about Islamophobia, Xenophobia, social injustices such as the middle east crisis and is a mental health advocate, conducting workshops & speaking up about her own struggle with depression and anxiety.

She has been named as a human rights defender by Amnesty International Chelmsford, UK, and nominated as the most influential Muslim youth of 2016 by Human Relief Mission Organization of King’s College in London.

Her activism methods involve social media experiments, some of which resulted in global trends encouraging other activists from around the globe to follow in her footsteps recreating the projects in over 30 cities worldwide, street interviews to raise awareness about social injustices, and is regularly invited to events, galas and universities as a speaker to share her journey and encourage the youth to become social awareness citizens and to give back to the community.

But Assma is far more than just an activist and modest model, her story is truly an inspiration for thousands around the globe… It was in 2013 when Assma was diagnosed with Thyroid Cancer, which she defeated in a nerve-wracking battle that lasted for two years…

She writes in one of her articles,

“The fear of not knowing what will happen next, the anxiety, the rumors and being shunned by others, the abandonment, the suicidal tendencies, and the fight to keep going and continue having faith that God is the best of Planners, was the hardest thing. Because I told myself that if I am to be cured or not, that is God’s will. But to keep fighting the demons of my mind when I wanted to give up and found myself alone, was the hardest thing I ever had to endure.

So in some ways, I am grateful that I had cancer. Because it was a wake-up call, a reminder to be grateful and to count my blessings. It taught me what’s real and important in life. And it taught me to take care of myself, my mental health and to never lose faith in God no matter what is thrown your way.”

In a hostile world where we live today, people like Assma are a true source of inspiration for hundreds around the globe. Her painstaking journey is a symbol of hope, courage, and resilience…

You can further explore her projects, her interviews, or the organizations she was invited to speak to on this site. As well, you can watch her social media experiments on her Youtube channel.