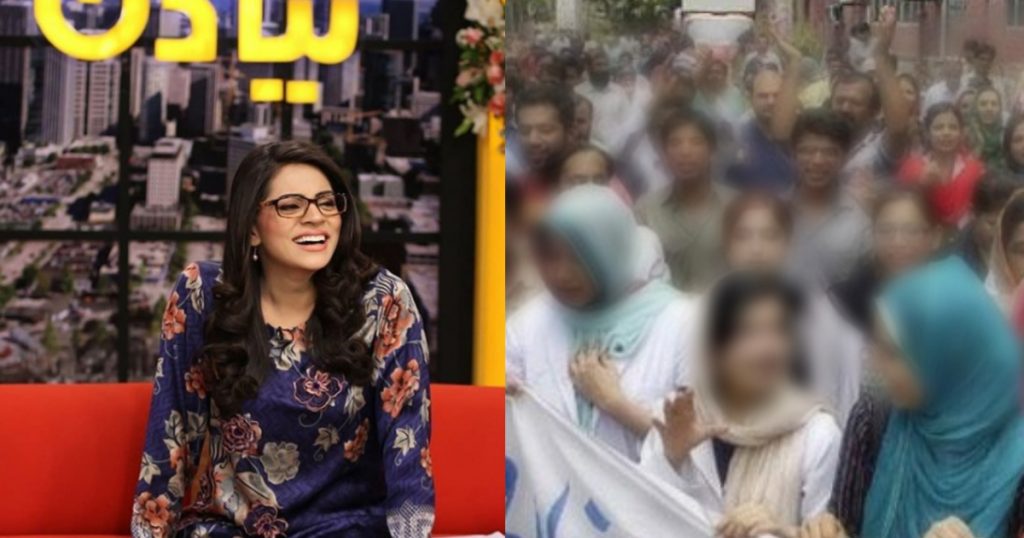 A Female Anchor Insulted Young Doctors Who Weren’t Getting Salaries, On Live TV, And The Awaam Is Angry!

In any country, controversy is a “thing” maybe call it a new trend. Social media can’t survive a day without controversies. Imagine billions of people waking up in the morning and scrolling through social media, they don’t find remotely anything “spicy” to have an opinion about, how would it feel? This exactly why A LOT of controversies are made, they really don’t exist but something hot should roam around the internet for people to have a good time.

But looks like this time, the cause which erupted a heated debate over the internet has something very ugly! These two news anchors hosted three house officers, who were interning at Abbasi Shaheed Hospital. These young doctors were protesting for a few days and people were skeptical about their demands.

They were hosted on this show, so they could put their demands, on a public platform. But what happened during the show was quite weird.

The lady anchor Kiran Aftab was thought to be “condescending” and “rude” by the people on the internet!

These doctors protested because the hospital didn’t pay them for past good four months. And there were other Ph. Ds serving in the hospital whose salaries were not paid for the past eight months.

But all this lady anchor thought in this whole case was, that these doctors leaving the patients untreated. When the house officers tried explaining to her that they have made team and they are volunteering to treat the patients, Kiran beautifully brushed their talk and continued saying that “bara ehsan kiya hai apny”

The talk continued further and she said that irrespective of the situation you doctors should serve the people as you became doctors by taking an oath to serve, and patients didn’t sign for diseases.

So, the debate is, who in it’s sane mind would agree to work for this long without being paid. It’s completely agreeable that doctors are meant to serve but aren’t they human? They don’t any expenses?

Watch this video and decide yourself if Kiran Aftab mocking these poor doctors is right or she’s just having a good time doing this!

Such an ignorant Female anchor with extremly rude behaviour and disgusting comments about Doctors! Have a look!

People all over the internet are angry at this conversation. No matter how bad the anchor’s behavior was these young doctors did not lose their calm even for once.

When a page shared this clip on facebook, the doctor present at the show commented on the video saying the lady didn’t let them speak for a minute!

These doctors should have crossed questioned this to the anchor!

What do you guys think of this? Let us know in the comments below! If you agree with Kiran or think she should give a statement to clear this fiasco.