Mahira Khan is the internationally known Pakistani diva that has paved her way to the top, becoming one of the highest-paid actresses. She is also Pakistan Spokesperson for L’Oréal Paris and is representing both, the country and the brand at the Paris Fashion Week 2019. The Fashion Week commenced on September 23 and will continue till October 1st.

Mahira’s fashion sense has never failed and she pulled off some of the most stunning looks at various occasions abroad. It’s not too much of a stretch to say she looks great in anything she puts on but not everyone would agree with some of her choices.

Social media, as great of a platform it is to reach out to millions of people around the globe in an instant; for public figures, it invites a lot of openly hurled criticism too. Moreover, oftentimes than not, these remarks of criticism get too personal and nasty. However, Mahira couldn’t care less since she has such a great week ahead in Paris.

Mahira is excited to represent Pakistan at the Paris Fashion Week.

In a press statement, Mahira said, “Representing the brand and the country at Cannes Film Festival last year was an incredible experience and continuing the same representation at Paris Fashion Week couldn’t be more exciting – it is after all THE fashion week to be a part of and I’m delighted for the opportunity to represent Pakistan at the world’s most coveted event, where beauty meets fashion – We are all worth it!”

Truly, Paris Fashion Week is THE place to be and for these artists, making it to this show is the ultimate achievement. Of course, you cannot attend it without having some great fashion pieces lined up to WOW the audience; Mahira seems to have that part down to a T.

Look at this beauty!

However, Mahira’s one outfit, in particular, didn’t click with Pakistanis and they didn’t hold back!

The leading actress of ‘Superstar’ seems to have a laid-back theme to her outfits and this black leather one, in particular, became the latest target for trolls.

If these trolls actually saw the outfits people don in the name of fashion, they’d see how dramatic they are being over a very simple choice of Mahira’s. Nonetheless, she looks magnificent with those silver boots and minimal makeup.

Trolls doing what they do best- Troll!

Mahira could have consulted with the person below! They seem to know the fashion language better. 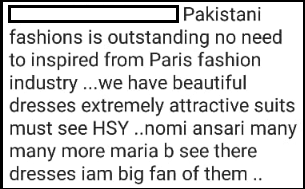 The IQ level on this one is amazing!

How romantic! If anything that should be revealed here is the irony of some men who would look at these pictures and then release a fatwa!

PREACH! Someone had to say it for the most popular Pakistani beauty! 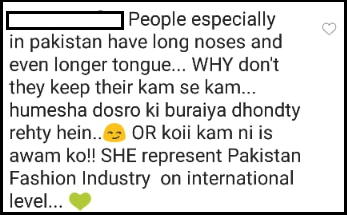 Haters are always there and one such as Mahira Khan can easily tune them out of the equation. The Superstar actress is scheduled to walk the ramp under the Eiffel Tower today, sources suggest. However, no details regarding her outfit have been released so far!

We’re sure excited to see how Mahira looks, although it is a given she will look absolutely stunning!

Have anything to add to the story? Comment below!