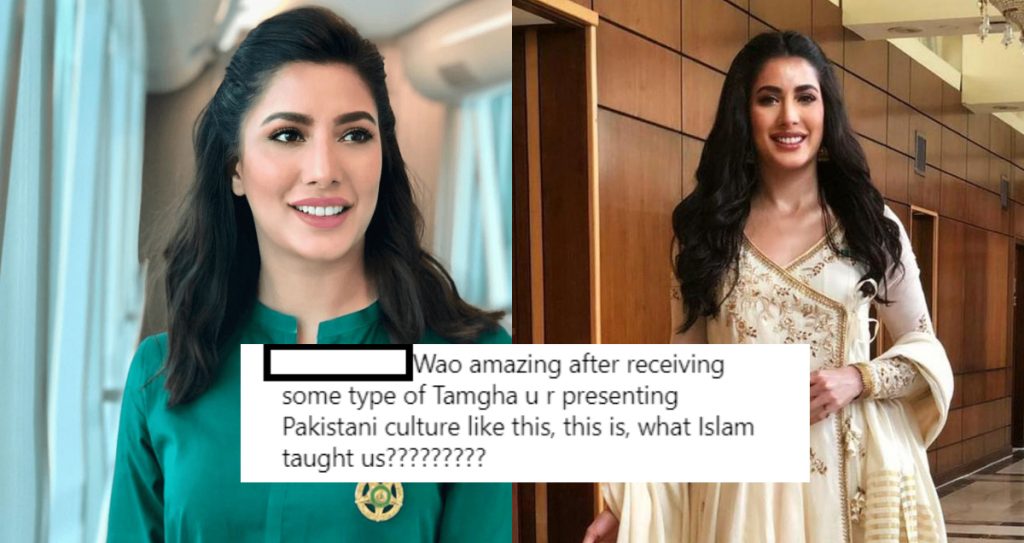 Mehwish Hayat’s Latest Picture Is Making People Question Her ‘Tamgha-i-Imtiaz’ And This Needs To End!

For the umpteenth time, it’s just a regular day on Instagram where a female celebrity is cornered and met with remarks because of the clothes she chooses to wear and the picture she uploads on her own account.

The moral brigade comes faster than the white walkers on their self-righteous choo choo trains. You will find diversity in this brigade, they’ll be ‘weirdos’ that’ll eye the women but these are the same men that’ll comment and remind them to cover herself properly; a little nod to their delusional sense of ‘ghairat’mand admi’. Then we have sisters reminding them about religion and how they do not want to be associated with women like her [the female celebrity] because of their fahashi.

This must have ground your gears and by no means, this post is being written by a liberal nor is this post trying to come off that way. Think for a second, there are better ways to approach someone and try to bring them to the path that you think is right or the religion Islam wants Muslims to follow but going on to someone’s Instagram account and calling them out for what they wear is somewhat wrong!

Mehwish Hayat Posted A Picture On Instagram And Everyone Lost It

Pretty sure she knew the choo choo train will come on strong and so it did. She recently received Tamgha-e-Imtiaz [“It is the First-highest decoration given to any civilian in Pakistan based on their achievements”] for her contributions to Pakistani cinema and even then she faced heavy criticism. The people of Pakistan never seem to be happy and always ready to throw negativity at the first chance they get.

Just as expected Pakistanis do not disappoint, see for yourselves

Stick with the culture Mehwish, Geez!

Didn’t you just judge though?

Pack your bags Mehwish, this user said so

Playing both the fields here are we?

Trust me these comments were the mild ones, the gaalian are all over the place and it is disappointing. The fact that people think that if someone has done something wrong according to their moral standings, he or she is worthy of such comments and verbal jabs. It goes to show the negative mindsets of our awam. How do you think we can bring change and make these people understand that being disrespectful will not solve anything nor will it add any value of any kind.