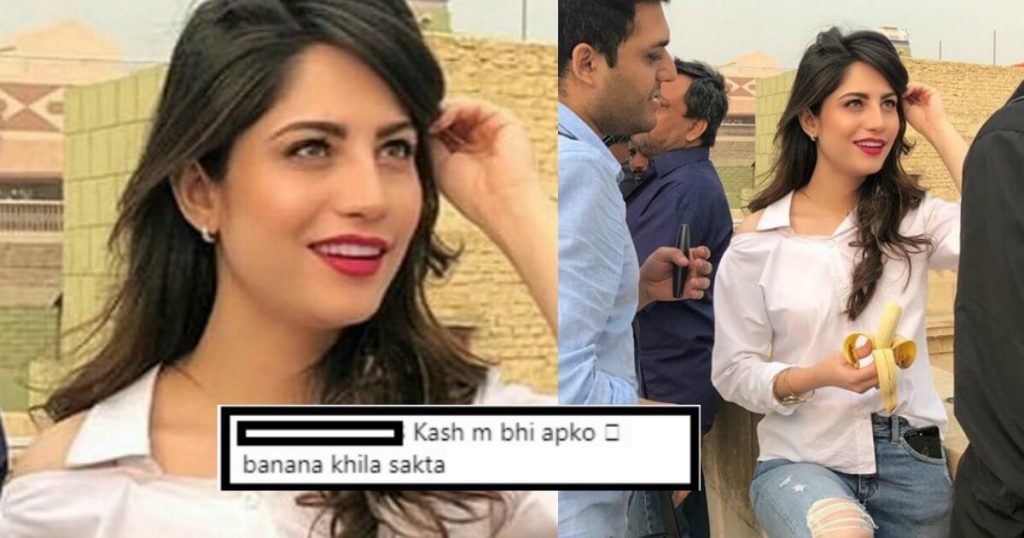 Neelam Muneer’s Picture Of Eating A ‘Kela’ Has Become Too Controversial And The Fahashi Has Restarted!

Neelam Muneer Khan is the perfect example of beauty with the brain! People loved her flawless acting skills in ‘Dil Mom Ka Diya’ in which she played the role of a negative character. Ulfat’s character will be remembered by Neelam Muneer fans for a long time!

But it seems that she gets attracted to the controversies all the time. A few days ago when Neelam was busy in vacationing in Sri Lanka and her pictures were making rounds on social media, Twitteratis were busy in criticizing her for posting ‘behaya’ pictures!

Here Are Some Of Neelam Muneer’s Besharam Pictures!

A few days ago, Neelam posted another picture while eating a ‘banana’ on the set of her upcoming project and her fans found the caption of the picture subliminal!

And Here Is How People Responded To Her Picture!

Slow Claps For This Guy!

This is not the first time. In January 2107, a leaked video became viral on the social media featuring Neelam Muneer. The video was filmed inside the car in which Neelam Muneer was seen dancing while sitting at the back seat. The video gained immense likes, comments, and shares, everyone was crazy to see what Neelam was doing.

Here Is The Leaked Video Which Went Viral on Social Media In No Time!

It can be seen that Neelam was dancing on a Bollywood song, she was comfortably sitting and enjoying in the car. Soon after the video went viral on social media, people started judging Neelam Muneer for her dance moves.

On the other hand, her fans defended her at the same time. According to them, she is comfortable with the person in the car who was filming the video and that is why she danced and ignored how judgemental people can become on her smallest of acts. She may do whatever she finds logically fit, and the criticizers should know there is no harm in enjoying a song with a partner or whoever is in the car with her.

During The Promotion Of Her Movie Chupan Chupai, People Demanded To Show Her Dance Moves Once Again And She Did It!

While social media warriors continued blaming Neelam as if she was the one who uploaded her dancing video, a bunch of Pakistani female celebrities came to rescue Neelam from this controversial release. Sabar Qamar along with other co-workers of Neelam made a video where they shared their support for the actress in a very subtle manner. Sitting in the car, playing ‘Mahi Ve Mohabbata Sachiyan Ne’ in the background, they danced and showed their love to Neelam.

What do you say? Is she the attention seeker who does anything to get fame? Or she is just enjoying her life, it is just people who are ready to criticize her for everything? Share your thoughts with us in the comments!