As time progressed and people found their voices to raise over problematic issues that have been long been plaguing the societies, many vices came forth. Body shaming was one; mostly directed towards women at large. This is the product of the ridiculous beauty standards that were set by major beauty-brands, that banked on the insecurities of women in order to sell their products.

What happened was that the constant projection of an unrealistic image of what beautiful is, not only led to women feeling down but allowed the bullies to tease others by body shaming them on being perfectly imperfect.

This caused a chain reaction of consequences where victimized women would resort to plastic surgery or feel depressed and worthless. Moreover, body-shaming, fat-shaming or any other type has been globally recognized as a mental disease that needs to be addressed.

However, Bhool’s starlet Nimra Khan posted a picture on Instagram with a caption that could’ve been worded differently. Since the message that she is giving across isn’t the most healthy.

Nimra Khan fat-shames in her caption by vowing never to be fat in her life.

It is imperative to give everyone the benefit of the doubt if there is a chance. However, Nimra didn’t leave much window open for that to happen for her. Her caption was quite suggestive implying that being fat is something shameful and that she wouldn’t want to be in that position, ever.

The moment of disappointment is not that she is indirectly enabling fat-shaming, what is worse, is this is coming from an established star who has a certain level of influence over her female following. Moreover, her caption is not well-thought-out, which is also another point to consider when you are a prominent personality. You would want to be careful with the kind of message you are giving across to the fans, followers, and admirers.

People were quick to catch on and were displeased.

Yes, Stop! Let’s promote accepting oneself as is and feeling beautiful in ones own skin. 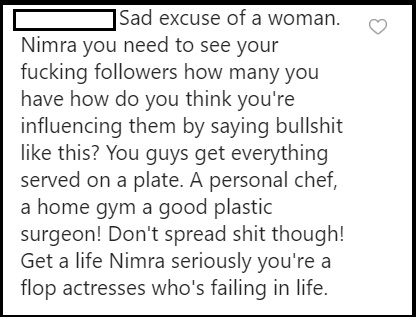 Exactly! Just be happy with however you look.

Young girls suffer from body-image and as an empowered woman, it is your duty to help these women feel confident in their skins. However, it first begins with you. Further, Nimra needs to deal with her own insecurities, so she could truly inspire other women.

Body image as a whole involves many aspects and not just the weight. In addition, there is another issue of body hair, that adds to the plethora of insecurities women have. However, an Instagrammer tried to remove the stigma attached to body hair. Hence, this is the kind of inspiration women should derive from Nimra Khan.

Have anything to add to this story? Comment below!