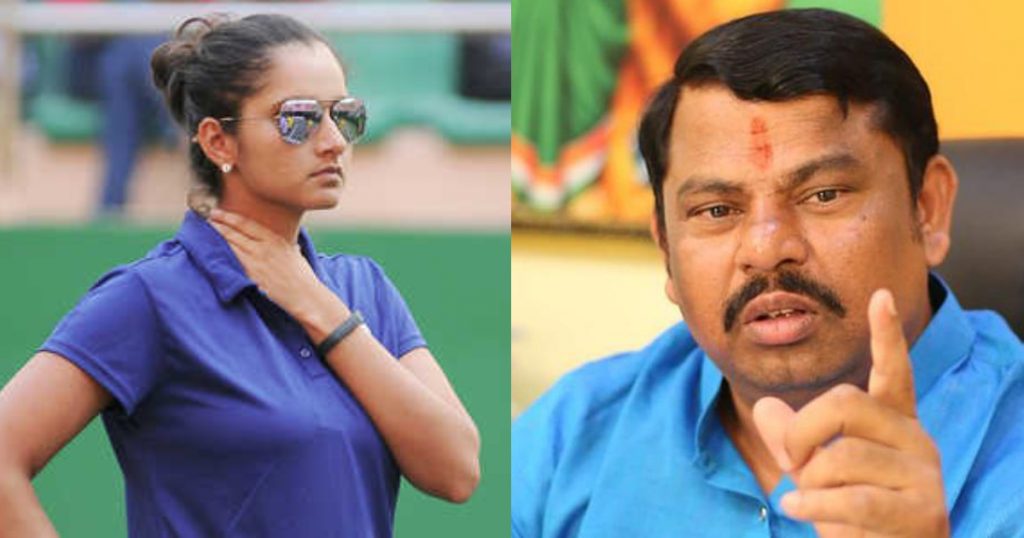 This Indian Politician Demands Sania Mirza To Be Removed From Telangana Brand Ambassadorship And It Is So Wrong!

In the recent Pulwama incident, so many things happened in India, Pakistan and Kashmir! In Kashmir, more than 40 army soldiers lost their lives. After which the Indian media and the internet started erupting wars on Pakistanis. Shabana Azmi and Javed Akhtar decided to cancel their trip to Pakistan, due to this incident. Ajay Devgan along with his team decided to NOT release his movie in Pakistan!

And just recently the BJP legislator in Telangana assembly T Raja Singh demanded Sania Mirza be removed as the brand ambassador of  Telangana.

He quoted the reason because Sania is now “Pakistan’s bahu”!

T Raja Singh famous for his controversies said in a video message to Telangana chief minister K Chandrasekhar Rao that it’s about time that India should cut off all the ties with Pakistan in all forms!

He appealed the chief minister to remove Sania Mirza from the brand ambassadorship as she ceases to be an Indian anymore because she’s married to a Pakistani!

But there’s was no knee jerk reaction from Sania after T Raja’s demand to remove her from ambassadorship!

Saddened at the attack on our CRPF soldiers in #Pulawama ..my sincere condolences to the families.. there is no place for terrorism in the world.. prayers for peace .. #PulwamaAttack

Sania by blood and by heart has always been an Indian and she’s taking full pride in that! She’s always represented her country and respects its integrity, she loves her people.

Sania said: “I play for my country, sweat for it and that’s how I serve my country. I stand with the CRPF jawaans and their families, my heart goes out to them and they are our true heroes who protect our country.. 14th February was a black day for India and I hope we never have to see another day like this, no amount of condolences can make any of this better.. this day will not be forgotten and neither shall it be forgiven but YES I will stay pray for peace and you should too instead of spreading more hate,”

Sania handled this matter very maturely and we love her for that! Her removal has nothing to do with her the Pulwama incident! May the righteous of all wins!