This Pakistani Jawan Hurt a Little Child Inside his School And he Proves Black Sheep Are Everywhere!

This Pakistani Jawan Hurt a Little Child Inside his School And he Proves Black Sheep Are Everywhere!

There are many in this world who abuse their power in a wrongful manner and this upcoming story we are about to tell you is the same. Have you ever heard a grown man beating a child (not of his own) because the kid got into a fight with his child? This is what Pakistan army jawan Major Arbab did.

According To Various Posts Circulating On Social Media, Major Arbab Beat a Kid In School Over a Fight

Sources reveal that Major Arbab’s son got into a childish fight with Dr. Atif Faheem’s son; both kids who study in grade 3 of a private school located in Dikhan. The allegations made on Major Arbab reveal that the army official went to the school of his son, where he started beating Hassan in the school playground. Not a single worker from the school came forward to save Hassan from the brutal beating of Major Arbab.

Here’s Hassan After Being Beaten By Major Arbab 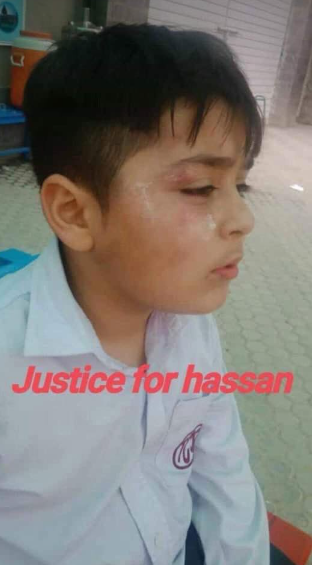 All of this over a fight between two children? This is alarming.

According to Hassan, Major Arbab Beat him Enough that he Started Bleeding In the School Ground

Moreover, the child also revealed that Major Arbab’s wife abused Hassan’s mother and father. People on the internet are demanding justice and accountability over the actions of Major Arbab:

How can a school allow someone to beat up someone else child like this? Is it because the culprit is a serving major so he can just walk into school & manhandle someone else child, involved in a brawl with his son, while the school looks away?

Here’s the video of Hassan narrating the incident:

How can a school allow someone to beat up someone else child like this?

Is it because the culprit is a serving major so he can just walk into school & manhandle someone else child, involved in a brawl with his son, while the school looks away?@OfficialDGISPR, action? pic.twitter.com/cApfdbhc3g

This is Major Arbab
A army general living in Dikhan
His son studies in The City School in class 3
On left is Hassan Faheem son of General
Suregon Dr Atif Faheem also in 3 class
The son of major arbab and dr atif got into a simple childish fight 1/3 pic.twitter.com/9mSVOz3ylR

@OfficialDGISPR Sir plz take a notice of this incident & make an example of him so that other people can't point fingers on our armed forces.
His name is Major Arbab from dera ismail khan..
Thanks https://t.co/tIKYDop929 pic.twitter.com/m72BinPHtx

Army is there to protect the civilians but in this case, the opposite happened. Let’s hope that we find the truth behind this story and the army takes actions against whoever breached basic human rights here.

On the other hand, you are a brave kid, Hassan!

Pakistani celebrities are loved for their glamorous lifestyle and of course exclusive love life. The most exciting thing for us ...

When it comes to Pakistani celebrities, they sure know how to party lavishly. Most importantly, love is truly in the ...

Vahit Tuna, an artist and graphic designer, came up with an interesting art installation in Turkey. It is capturing the ...

This Pakistani Husband Is In Dire Need Of Your Financial Help As His Wife Battles A Brain Disease!

Life truly is unpredictable and short. One does not know when life will throw a curveball at you, turning your ...