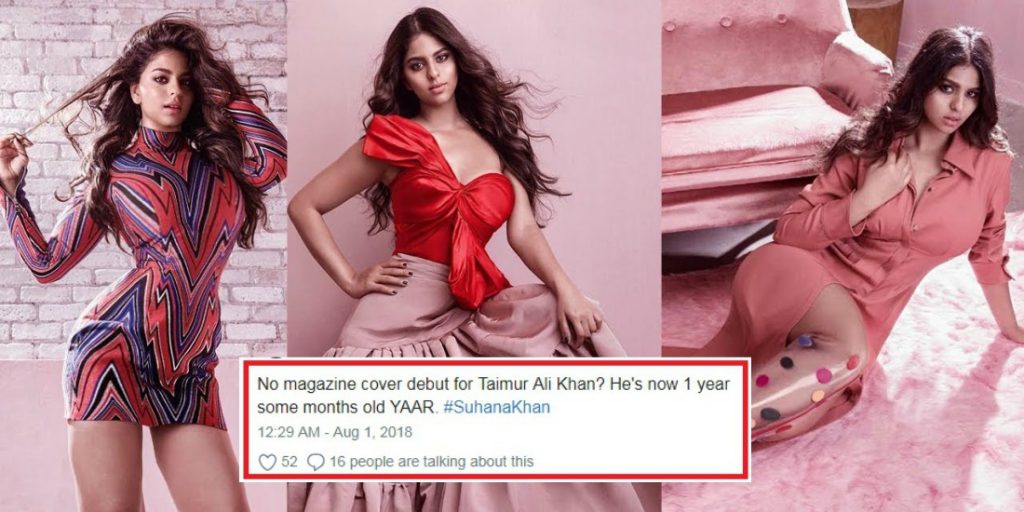 Vogue India is the leading magazine of fashion world and lifestyle. It is the 17th international magazine. Yesterday, Vogue India covered Shahrukh Khan’s daughter Suhana Khan for their latest edition. With this photo shoot, Suhana has stepped into the world of glamour. Shahrukh Khan expressed his views on Twitter after the launch of the magazine.

He said that “Holding her in my arms again thanks to Vogue. ‘What imperfect carriers of love we are…” except when it comes to our children. So sending u all my love & a big hug. Hello Suhana Khan!”

Holding her in my arms again thanks to Vogue. ‘What imperfect carriers of love we are…” except when it comes to our children. So sending u all my love & a big hug. Hello Suhana Khan! pic.twitter.com/RrkhJ8kfz5

Apparently, this tweet of Shahrukh Khan and this shoot of Vogue went viral, but, people are not happy at this. According to rumors, SRK has offered them money for posting her picture. Some are also entitled it as another example of nepotism in Bollywood. “She is not that superstar but she is the daughter of SRK and that’s why they have published this”, said a tweet.

Suhana Khan has given a shut up call to all the haters just after her picture went viral on social media. She tweeted that, “I keep telling myself that haters are going to hate, but I can’t honestly say that I don’t get upset by it. It’s annoying, but I keep telling myself other people have bigger problems.”

But Twitteratis are not “coming slow”, here is how they reacted on Suhana Khan’s shoot and her latest tweet.

Student, theatre lover, future star, daughter of a star who will probably finance all her movies till she actually becomes a ‘star’…. but yea hello Suhana Khan.

Vogue: We have #SuhanaKhan on our Vogue India cover

Some Are Supporting Suhana As Well!

There is nothing wrong in nepotism. If my father was an actor, I would have definitely asked for his help to give me a break and there is NOTHING wrong in it. Nepotism makes entry in industry easy, but after that it is the talent that speaks. Best wishes to #SuhanaKhan!

Actually, We Want Him To Be!

Can my waking up at 8 AM be considered as "Struggle"?#SuhanaKhan

People Are Not Ready To Let Her Go!

Struggles of being Suhana Khan:

1. Having a sea facing Bungalow, so beach vacations aren't exciting
2. Being so rich that you cannot decide which Rolex to wear
3. Not getting launched by Karan Johar even though you are 18 pic.twitter.com/e6L4rXZzKz

Frankly SRK and Gauri MUST NOT let Karan manage Suhana's career path! I am positive he is the one who pimped the Vogue cover idea…The girl is getting unnecessary hatred and being dragged…. 'Tis too early ?

Supporters Stood For Her!

Wth is wrong with ppl hating on Suhana! She’s the blood of Shah Rukh Khan; The King.. @iamsrk . She turned 18 & obviously she will be the face of various magazines even before she even act. Actually I thought she will be on an international cover. This’s nothing.

Lol Vogue India is locking comments on all of the Suhana Khan posts on their socials. Long live.

Well, it is just beginning, let’s see what happens next. Comment below to tell us what is your opinion about it.