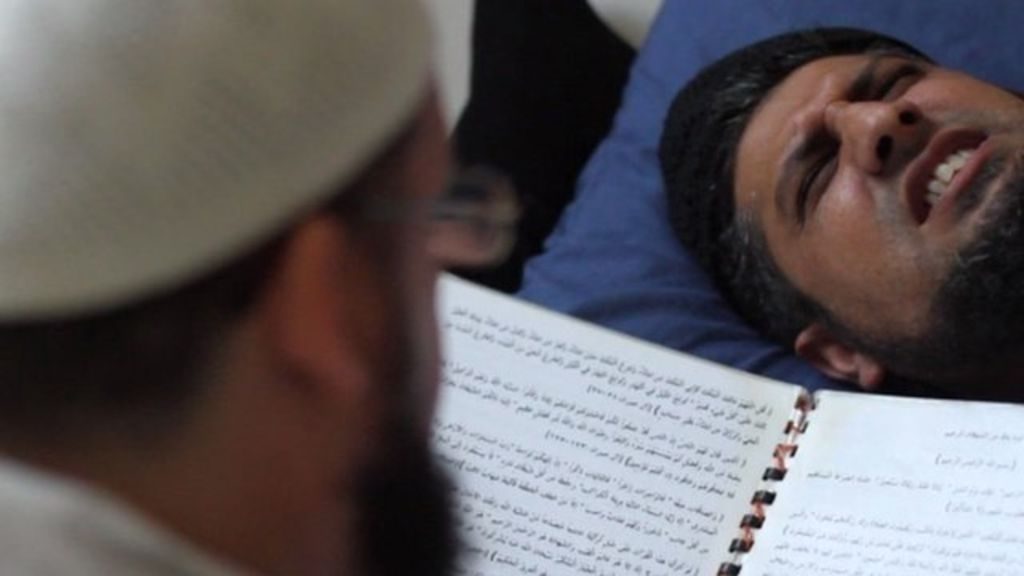 This Guy Talks About Jinns Who Want Sexual Relations With Humans And It’s Terrifying!

It is a rare thing for a Djinn to possess a human being but it does happen. A person starts behaving differently and they start feeling all the desires that the djinn is feeling. So when a djinn falls in love with you and wants to be with you sexually, what should you do? This Facebook post might help with your questions.

Patients with a Jinn Aashiq (Lover)!The oppression of the jinn begins the moment the person starts to fight against…

The oppression of the jinn begins the moment the person starts to fight against the jinn’s desires. For example, if the jinn desires to smoke, and the person who never smokes begins smoking, or the person begins to watch inappropriate materials on TV or the internet, as soon as the person questions what they are doing and tries to stop doing what is wrong, the jinn will try to punish them.

During the ruqyah, the jinn will usually speak and say that they love the person they have possessed, and refuse to leave the person. This is typical behaviour of a lustful jinn. It is very important for a raaqi to pay very close attention to what type of jinn they are dealing with, while he is reciting on someone in such a state, because there are different types of jinn and they have different strengths and characteristics, for example the afreet jinn will not speak at all, while others will speak straight away.

Shaykh Islam Ibn Taymiyyah said in ‘Majmu al Fatawah’, if the reason of possession is through fawahish – all form sexual desires and disobedience to Allah azza wa jal – touching, seeing, walking towards, to have evil intent concerning sexual desires – it is very important for the raaqi to tell the jinn that this is haraam, and Allah azza wa jal has made this haraam on mankind and jinn. The raaqi is then to deal with them appropriately according to the Qur’an and Sunnah.

When the raaqi is trying to convince the jinn to leave the body, the jinn often refuses, although sometimes they may become Muslim yet still stay with them.

It is very difficult to help someone who is far away from Allah (swt), since they are confused can start fantasising and believe that they are in a romantic story, and are not aware of the reality of life.

Ways to take precaution to stop a jinn having sexual intercourse with the patient!

• Use Musk al Aswad, or olive oil that has been recited up on the private areas of the patient, every night before they go to sleep.

• Sleep in clothing that covers the entire body, i.e. to the wrists and ankles.

While removing clothing recite ‘Bismillah” as the devil gets blinded and can’t look at the private parts due to this. Another hadith reports that one should say bismillah la ila ha illahu.

O children of Adam, let not Satan tempt you as he removed your parents from Paradise, stripping them of their clothing to show them their private parts. Indeed, he sees you, he and his tribe, from where you do not see them. Indeed, We have made the devils allies to those who do not believe. (Surah A’raf: 27)

• To recite the morning and evening Adhkaar.

• The patient should not sleep alone.

• The patient should seek refuge and protection in Allah from the Shaytaan and sincerely believe.

Allah to be sufficient for them!

It is important not to confuse the jinn with Shaytaan, Iblees, who lives on the sea. His troops and followers are the ones who are widespread over the earth. The jinn are everywhere, in the market places, in the homes, in the bathrooms etc.

Anas ibn Maalik narrated that when the Messenger of Allaah (peace and blessings of Allaah be upon him) ate, he would lick his three fingers, “And he said, ‘If any one of you drops a piece of food, let him remove any dirt from it and eat it, and not leave it for the Shaytaan.’ And he commanded us to clean the plate, and said, ‘For you do not know where in your food the blessing is.’” (Narrated by Muslim, 2034).

Sexual intercourse between human and jinn!

Sexual intercourse between a human and a jinn can happen in one of the following ways;

• The person has a wet dream.

• Seeing a form who they will sleep with, with this they can have children.

• A person doesn’t have a wet dream, but feels as though someone is having sexual intercourse with them.

The jinn will come to a man or woman in the image they desire, and by doing so will take pleasure by fulfilling their sexual desire.

The marriage of jinn and humans
Shaykh Islam Ibn Taymiyyah says in ‘Majmu’ al Fatawa’ – if a human being loves a jinn and there is a mutual agreement they can have children.

This is something that is well known. Bilqis, the Queen of Saba, one of her fathers were from the jinn. This can be found in Luq Al marjaan.

On occasion the jinn will say that they want to marry the person they are in love with, in which case it is vital to show the jinn that this concept is absurd since the person cannot see the jinn that is asking for marriage. Even if they were to take a form where the person could see them, it is still forbidden.

The evidence is in the Qur’aan, where Allah (swt) says;

“And of His signs is that He created for you from yourselves mates that you may find tranquillity in them; and He placed between you affection and mercy. Indeed in that are signs for a people who give thought”. (Surah Ar Rum: 21)

The jinn should be informed that if they were to leave something for the sake of Allah azza wa jal, He (swt) will give them something better. For example, Allah (swt) will reward the believers with Hoor al ‘Ayn in Jannah.

Most of the cases of jinn possession are due to lustful desire. A person who has been desired does not have to be beautiful.