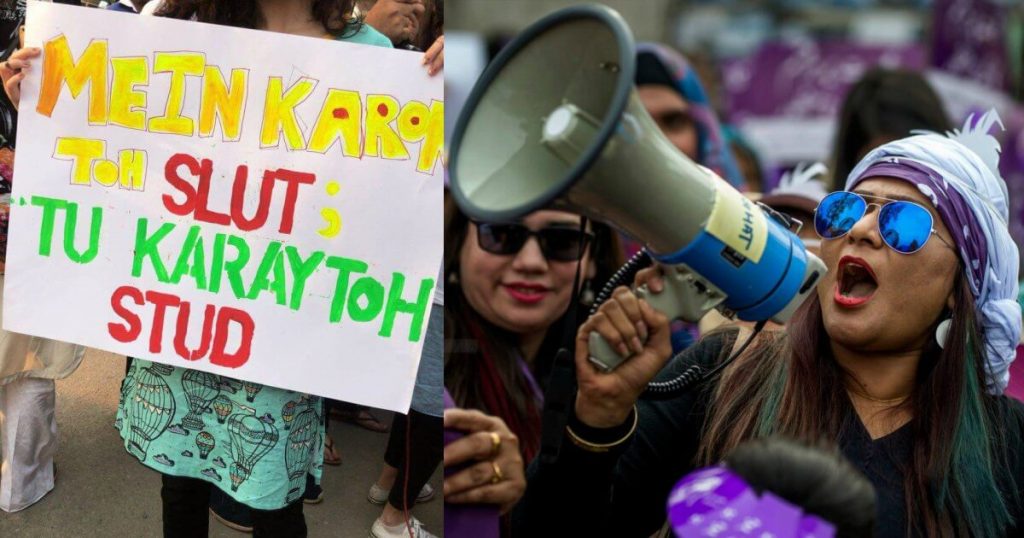 This Pakistani Guy Shares His Two Cents On The Women’s Day Placards And Here’s What He Thinks!

Yesterday, I had congratulated all the ladies our there for the International Acclaimed Women Day. As the night progressed into the day, some bad apples on social media popped up. I feel disappointed and ashamed to see that some women of today are being colluded with extreme thoughts, like some shallow girls posing childish posters.

The first one was: Apna Khana Khud Garam Karo! Do you think making the food warm for your father, brother, kids or your husband is oppression? Another one stated: Nazar Teri Gandi aur Parda Karun Mein? Do you think that covering yourself is done to prevent men from indulging gazes? Like really? As a Muslim, covering the body is mandatory. It is not an imposition of men on women, its the word of God. So, now do you want to fight him? Like what’s next?

Muslim liberal? Ok then, even if you don’t wanna cover, it’s fine. Men will look at you even when you’re covered from head to toe. Why? Because as humans, curiosity kills the best of us. It is psychology. Please read some Freudian theories to get a sense of behavioral science. Then followed: Tu Kare tou Stud, mein karoon tou S*ut! This lady wants equality in *ex, let me correct that, she wants to become a s*ut and be compared with a playboy. Men who are playboys are deemed as dark characters and she wants to become the dark queen. Being logical, it is a pathetic poster to flaunt.

Then, there were some generalized selfish statements, things our mothers or sane ladies would boo themselves. Like some ladies who want the men to iron their own shirts. Such a hasty generalization again. If our wife does it, she cares for us or is helping us out and we help them out, that is what the beauty of a relationship is right? Are we really stepping in the age where doing small favors for each other an ordeal? Like seriously? So you’re saying that if I iron my dad’s or mom’s clothes, I’m oppressed. Alright, noted.

Another lady wants the man to make his own meals. Wow! What a nice idea! Gordon Ramsey should definitely be offended by this one. Why are we living together then? Let us move out and live like the ol’ Grinch. You see you can get *ex like a s*ut, can iron your own shirt but not mine because it makes you remember the era of slavery, you cannot make me a meal because it is a humiliation for you to care for your partner, and as you are working and can get your own place and a ride, then what is the need of living together after all? It is no more the August Ames theories then, everyone wants to keep Herbert Spencer as their mascot.

Go have fun, I will have some too. Let us see where this path, which you proclaim as liberation takes you? It not only promotes anti-Islamic practices of being accepting of different sexuality but also promotes adultery, and invites sperm donors to help mothers make babies in the labs like some mosquito prototypes. Where is this world heading? If snapshot filters of being perceived as dogs weren’t enough, do we really need to be the dumbest generation of humanity so far? Even cavemen covered themselves with leaves.

Your pro-feminist movement may have some valid points but your google maps are heading towards an inevitable catastrophe! Stop being crybabies and throwing invalid tantrums. This is not the reason this day is celebrated. For God’s sake, be sane and mature in the promotion of your equality and fundamental rights. Bring some real hurdles to the plate.

Now, I do not need to justify to the women I respect: Mothers, sisters, coworkers, daughters, women who lost their lives by village courts (jirgas), got divorced when unable to bear a child and all the other women who had faced the real hurdles. This women day is for you ladies out there. I am deeply moved by your efforts and fights against the inhuman ways the society treated you. I would ask you to neglect this kind of social evils within your movement by waking them from the deep slumber and making them realize the real problems women need to get fixed than to force men to get their own roti-makers. I would sum it all by some lines in Urdu: