Mehwish Hayat Claps Back At Haters Who Questioned Her|Pink.Parhlo.com 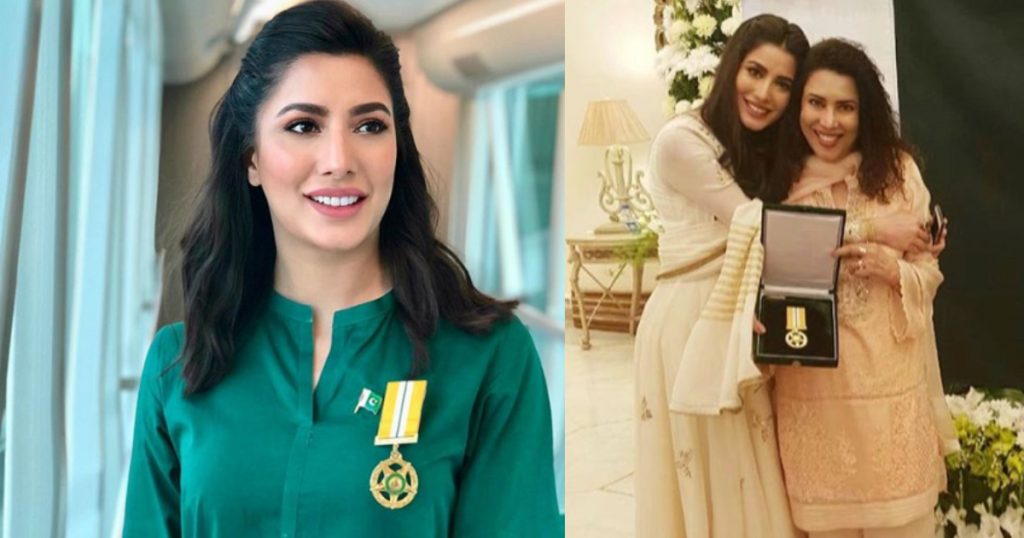 Mehwish Hayat Claps Back At Haters Who Questioned Her Morals Over Tamgha-e-Imtiaz Win And She’s Slaying!

Mehwish Hayat was awarded the prestigious ‘Tamgha e Imtiaz’ on the 23rd of March at the Aiwan E Saddar for her achievements in the Pakistani media industry but along with it came a lot of criticism and degrading remarks for the JPNA actress.

In spite of her unsurmountable contribution for Pakistani television and cinema, many in the country could not fathom the concept of Mehwish Hayat getting awarded on a national level with a Tamgha-e-Imtiaz for her services and continued to attach degrading labels with her questioning her success.

People began to question her character and integrity

Welcome to Naya Pakistan, so ashamed to say "is this a madina ki riiyasat? Where Promoting vulgarity is appreciated #MehwishHayat pic.twitter.com/USpA5JOLTb

There were polls and votings taken for Hayat to figure out whether she’s worthy of the award!

Does #MehwishHayat truly deserve to be nominated for the Tamgah-e-Imtiaz?

People also questioned her morals and the choice of government who’s presenting her with the Tamgha e Imtiaz.

After receiving her award, Hayat shared the below picture on her Instagram expressing how overwhelmed she was with it. She dedicated her award to all the young women who strive to make their dreams come true!

Here’s what she wrote: 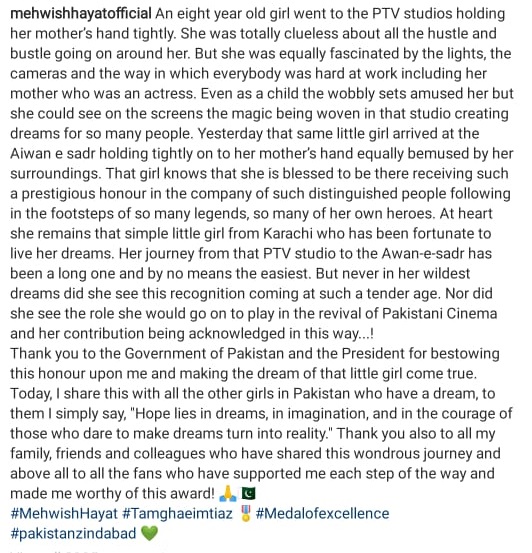 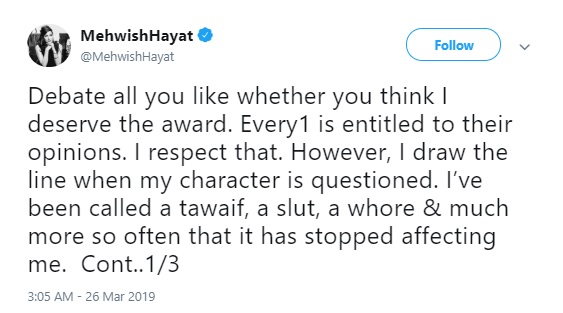 I never wanted to make this a gender thing but it is unfortunate that others seem to be. To suggest that I slept my way to this award is an abhorrent slur on all the hard working women in our country. We may be part of an industry that is seen to be glamorous – but it ..2/3

Hayat also wrote how women in our industry are treated, and how their ‘morality’ is always questioned.

but it doesn’t mean that we have forsaken our morals. What gives anybody the right to drag my name into the gutter. You don’t know me! Thank you to all the supporters & also to all the haters, it has only made me stronger.Last couple weeks have been quite an eye-opener for me.3/3

Right after Hayat shared the above tweet, a response from various renowned names began flooding in for the actress.

People waste no opportunity to tear down the Arts & women in PK. So ofcourse if a woman wins an award in Arts,all hell wud break lose.U @MehwishHayat won the debate tht followed & created an enabling enviroment for women from arts to come fwd.& when they do,trolls wil think twice

Actress Nadia Jamil also expressed her affection towards her

I think shes a lovely woman. Hard working & beautiful. An asset 2 our films/dramas. If the Indians cn appreciate Katrina Kaif & Kareena why cant we appreciate Mehwish? Do you watch Indian films & pretend not 2? I think we should #AppreciateGoodThings & commitment 2 our industry?

It’s beyond sad that people in Pakistan attempt to bring women down regardless of how far they have come and what they have achieved.

Mehwish Hayat has worked hard to her way to success and her lashing out on people makes sense. It’s high time we as a nation began treating women equal to men and appreciating their achievements rather than making everything about gender and character!

Let us know if you have anything to add to this story.