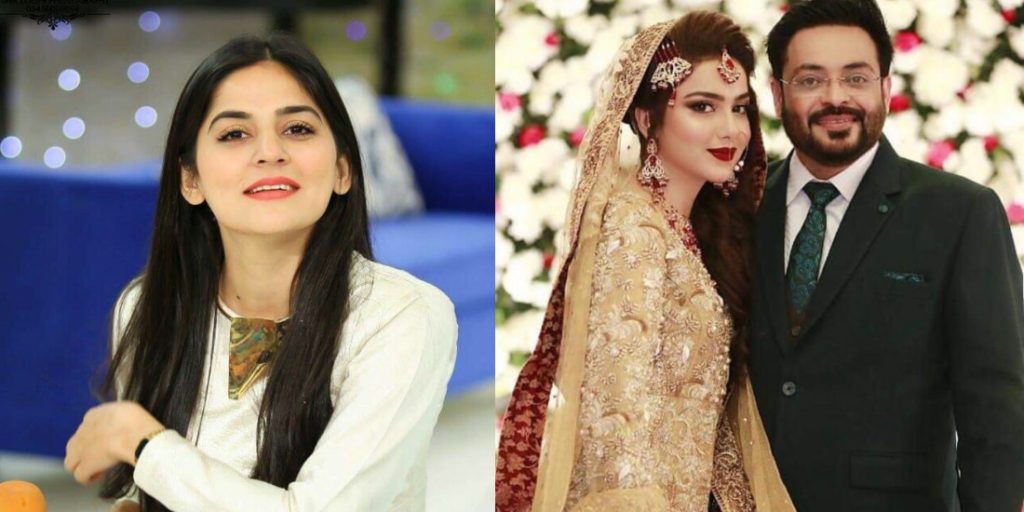 Sanam Baloch Asked Some Controversial Questions From Aamir Liaquat & Tuba And It Started A Fiery Debate!

Why does it feel like that the whole has taken it upon themselves to get married?! From the start of this year, we have seen people getting from friends to cousins to celebrities; even the ones who had no chance of getting hitched! Feroze Khan surprised everyone by posting a selfie with his fiance and then Aisha Khan. Now at the end of the year, Aiman and Muneeb tied the knot too! There was someone else, who’s secret was out (not so willingly) due to certain circumstances.

Aamir Liaquat joined PTI and when he was filling his papers for the elections, the news broke that he didn’t mention his second marriage in the papers. It was only then, the public got to know about his nikkah with Syeda Tuba!

Now, since the word is out and everyone knows it, people are SUPER curious about who she is and all the little details about them.

The first interview with Faisal Qureshi that the couple had gone crazy viral. Every little detail of the interview was turned into a meme!
Panther, nam to suna hoga! 😀 Do, we all know that Tuba calls Aamir “Panther” but she didn’t tell the reason behind it.

But now you know why Aamir Liaquat is Panther 😉

Also, just when the interview was aired Tuba changed her profile picture on Twitter and wrote: “Salam Meri Zindagi” to which Aamir quote tweeted it with saying “Walykum Salam Meri Zindagi”! People trolled them for saying this.

Aamir Liaquat has an answer for this as well!

So, when Sanam asked Tuba about why the marriage was kept secret; to which she replied that it was never a secret. They wanted to tell it on their own and share their happiness with people, but people got “jealous” and leaked this news before they could themselves.

Also, Aamir just told that what people thought was their Valima was actually their rukhsati!

But what surprised people more was this question that Sanam asked!

She asked Aamir “If your first wife is so religious, and as Islam gives a man right to re-marry then why she didn’t accept your second marriage?”

Amir Liaquat responds why his first wife didn’t accepted his 2nd marriage and criticism on social media by his own daughter.. #SamaaTV #Samaa #SanamBaloch

Sanam expressed her grief saying that she didn’t like how Aamir’s daughter was saying things about Tuba on twitter! But people didn’t like Sanam’s question in the first place but they also didn’t like her defending Aamir at all.

She can interview anyone if you don’t like it scroll up! Let’s be a little tolerant.

Aamir also said that his kids did many things that would shock people but we are staying silent! He further said that kids don’t use twitter on their own and don’t write stuff themselves. Ummm…
What do you guys think? Let us know in the comments below.