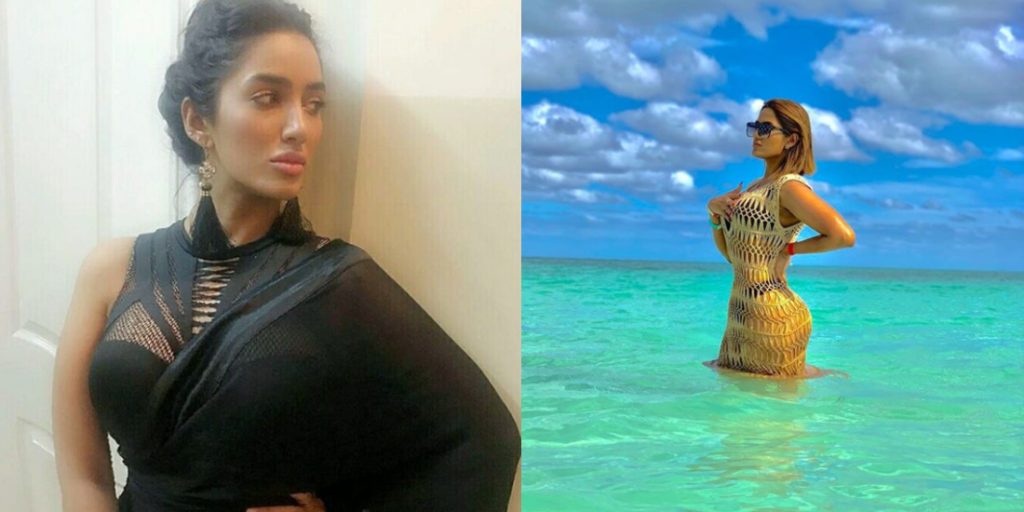 With every changing trends of on the internet, people are just confused at what to follow and what not to. Just when people get hold of a trend something else erupts, and then just after few days some other thing would come and everyone would rush to it. The old trend of musically was introduced to the internet and everyone hoped on it! Then we had musically celebrities and some great actors, the app actually is a karaoke but in a video form. So, people get to imitate others while they are acting and the video is being recorded. Awesome isn’t it?

After which now there are many apps that came after it but serves the same purpose. Now, many celebrities have joined this clan and are making some awesome video. The followers and fans are happy because they get to see something more exciting than the usual photoshoot and posters.

Mathira is one of them! Her tiktok videos are going actually viral!

Beaching and fun! Beautiful sky and legs 😀 *runs away*

Hoping that this trend won’t die soon, now that we get to see so many talented people emerging Mathira would always be the most interesting, like ALWAYS! If you know what I mean 😉

Mathira’s Instagram feed always a treat to watch! Her amazingly captured lavish life and beach photos are a life to live for. Mathira has been roaming around the world and partying like anything from Dubai to Florida and what not. She’s sure having the time of her lie, mother of

Bushra Ansari Opens Up About Her Divorce On Ahsan Khan’s Show!

Celebrity weddings and gossips have always been an entertaining part for the masses, but ending relations sure hurt. Recently, Pakistan’s ...

Syra Shehroz Fires Up The Dance Floor With Sister Palwasha!

Actress Syra Shehroz was seen in a video dancing at a wedding along with her sister Palwasha Yousuf. The video ...

Yasir Hussain & Iqra Aziz Have Officially Kicked Off Their Honeymoon!

The freshly married couple Iqra Aziz and Yasir Hussain have commenced this year with their honeymoon. The couple tied the ...

Undoubtedly, Pakistani celebrity weddings and gossips have been the main highlight of the current year. Apparently, previous rumors of actors ...

Zaid Ali Gets Trolled On Kissing Wife Yumna On Her Cheeks!

Internet trolls just need a reason and when it is pertaining to PDA (Public Display of Affection) then expect the ...