Pictures of Sohai Ali Abro at a Party Has Shocked Everyone for All the Wrong Reasons!

Pictures of Sohai Ali Abro at a Party Has Shocked Everyone for All the Wrong Reasons!

There’s one thing which would always be weird for one to see – which is how Pakistanis remind a woman of her religion whenever she chooses to represent herself in a liberal manner. They would ridicule her, mock her and make fun of her looks, just to make sure that they tell her that she is a less Muslim than themselves.

Actress and models in Pakistan are a target of this every now and then. They are subject to cyber harassment when it comes to them displaying their way of dressing up. Sohai Ali Abro becomes the recent victim.

Recently, Sohai celebrated the birthday of a close friend and seemed to be enjoying a lot. While a few of her pictures were shared over the internet, the Pakistanis couldn’t have it. Alongside bashing Sohai, people bashed her friend as well.

Just Because Two Girls Were Having Out, That Made them Lesbians?

They Couldn’t Contain their Eyes and Started Mocking Sohai’s Friend, Commenting on her Underarms…

Here’s More on the Makeup AND the Underarms 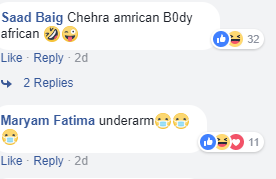 Or Maybe It Was Just the Flash…?

If there’s anything these social media fanatics are fond of doing, that is commenting on someone’s pictures – someone who chooses to represent themselves in their own ways and in their own freedom.

Sohai was hanging out with her friend, enjoying the moment and dressed up the way she wanted to. She is an artist and artists represent themselves in such a field because they don’t want to shy away.

However, you are not a greater Muslim yourself for bashing someone and commenting on them. It makes you a sinner as well.