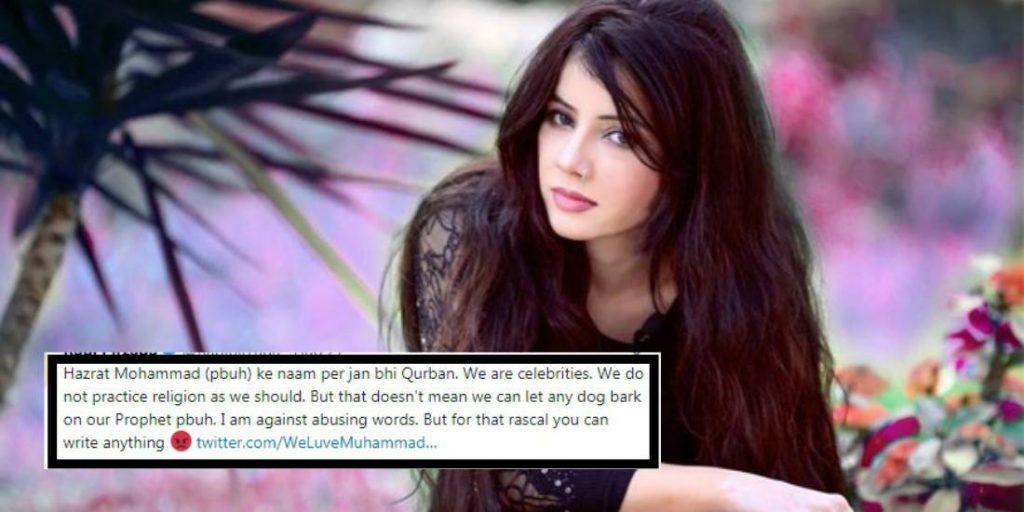 Rabi Pirzada Confidently Speaks Up Against The Blasphemous Cartoon Contest And Woah!

Rabi Pirzada is amongst the famous pop singers of Pakistan who launched her career with her first hit song dahdi kurree in 2005 which was a hit. Then came songs like Mujhe Ishq Hai, jadoo, and more. Rabia has been part of a few controversies in the past an lately, she decided to speak up against a serious issue.

Just last week, Dutch anti-Islam lawmaker Geert Wilders said that he canceled a planned blasphemous caricatures contest following “death threats and concerns other people could be put at risk”.  The contest was due to be held in November at the tightly guarded offices of his Party for Freedom in the Dutch parliament building. However, Mr. Wilders made a statement, saying “To avoid the risk of victims of Islamic violence, I have decided to not let the cartoon contest go ahead.

Cows are slaughtered to feed poor. The whole world is crazy about beef burgers and steaks… why only on our eid you get annoyed. Yes in islam its forbidden to abuse anyone's religion or messengers. https://t.co/Vg4HorkSKs

Here’s what Rabi tweeted that triggered many who were mocking the religion, Islam

Ok send me your mom's pic, lemme make a vulgar cartoon of it and then i ll have my freedom of speech too, n give u a valid excuse for murder if u ever loved her n carry some self respect… I love our Prophet Hazrat Muhammad (pbuh) more than anyone. https://t.co/iGTlvZBtI1

She later posted a video wherein detailed, she talked about the on-going issue of making blasphemous cartoons of Prophet Muhammad (PBUH) in Holland and how it is an act of terrorism and person accountable for this should be hanged to death.

She also mentioned how since then, she has received over thousands of blasphemous pictures and had to block those users. Not only this but she was also disappointed by the fact that not a single religious Muslim scholar stood by her in this sensitive issue.

I tweeted few days back something against holland making sketches… since then what's happening just listen….
Check out Rabi Pirzada (@Rabipirzada): https://t.co/Sp6ejGUFSe pic.twitter.com/onZDRdKzvl

Rabi’s Twitter account was also blocked later on for a short period of time. What are your thoughts on this?