After Lollipops and Juice Boxes, Pakistani Men Are Now Comparing Girls To Tissues! 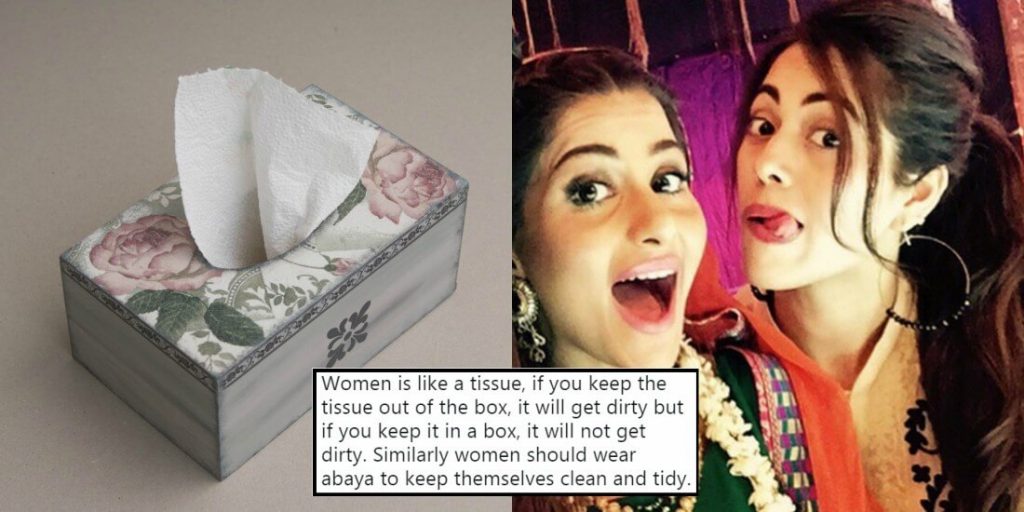 After Lollipops and Juice Boxes, Pakistani Men Are Now Comparing Girls To Tissues!

It has been seen that Pakistani men using social media love to preach women about the importance of hijab. Like if they are getting harassed, it’s all because of not covering their head. If some boys, standing on the street are teasing a young girl, she must not be wearing her hijab properly. And how can we forget this famous analogy?

A man asked a Muslim man: Why do your women cover their bodies and their hair? The Muslim man smiled and took two candies; he opened one and kept the other closed. He threw them both on the dirty floor and then asked: If I asked you to take one of the candies, which one would you choose? The man replied: The covered one. Then the Muslim man said: That’s how we see and treat our women –  (Author unknown)

You can find hundreds of similar stories on the internet which people find appealing and worth sharing. The same thing happened last month when a social media user compared women with ‘sealed juice boxes’! He wrote from his Twitter account that, ‘No one would buy a juice box if its seal is broken, then why would you marry a girl if she has lost her virginity? This is what Islam preaches us, my sisters, please keep your dignity intact’

Yesterday, another social media user came up with another analogy and this time, it is a ’tissue’!!!

Here Is What He Tweeted From His Personal Account!

He wrote that ‘Women are like a tissue, if you keep the tissue out of the box, it will get dirty but if you keep it in a box, it will not get dirty. Similarly, women should wear an abaya to keep themselves clean and tidy’

After this tweet, Twitteratis lost their calm. People criticized him from being a misogynist and comparing a human being with ’tissue box’

This Guy Nailed It!

So, He Has Some Supporters As Well…

What do you say? Do you really find this sort of analogies helpful for a woman for encouraging her to wear hijab? Or do you find this extremely stupid? Share your thoughts with us in the comments!